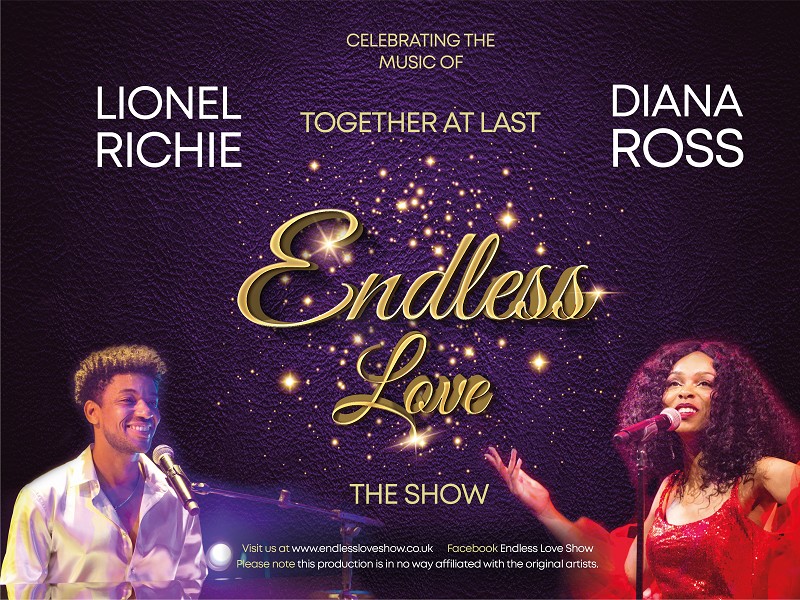 A song which Billboard voted as the number 1 Duet of all time and stayed in the charts for a staggering 27 weeks. It has since become synonymous with couples, lovers and enjoyed by millions of people around the globe to this very day.

However.... what no one could have foreseen is that since it’s original recording, these two icons of popular music would never perform the song together again!

Yes!....Incredibly for 40 years Lionel Richie has been asking Ms Ross to share that magic moment with him once more.... but as yet she has declined.

This brings us to the show you see before you.

What if they did perform Endless Love again?

If they spent one more magical night on stage?

A chance to perform many of their songs BUT with each other?

A mesmerising collection of hits and memorable moments from the decades, wowing audiences once more?........

Ultimately, a glorious celebration of their music.....together at last!

Originally a member of The Commodores and already responsible for tunes such as Brick House, Lady You Bring Me Up, Easy and Still. Lionel became a genius hitmaker and a multi Platinum/Diamond selling artiste in the 80’s. He was unstoppable...songs like Dancing On The Ceiling, All Night Long, Hello and Say You Say Me made him a household name. But the hits kept on coming....

Three Times A Lady, Running With The Night, Stuck On You, Penny Lover, Truly and Don’t Stop The Music are amongst many others that make him one of the most popular artistes and song writers of our generation.

Diana Ross.... Legend....Icon.... the original Diva and Queen of Motown. Ms Ross is music royalty and despite having recently celebrated her 75th birthday, she continues to hold a special place in the hearts of audiences worldwide due to her decades of work and also her ability to wow. Diana encompasses everything that is “Legend”. Songs which include I’m Coming Out, Reach Out And Touch, Cant Hurry Love, Touch Me In The Morning and Ain’t No Mountain High Enough are amongst some of the most well known songs in popular culture. Chain Reaction, My Old Piano, The Boss and Upside Down gave Diana a new dimension and then there’s the Ballads.... When You Tell Me That You Love Me, Do You Know Where You’re Going To and Its My Turn plus many, many more.....

Together, the set list of these two musical heavyweights is unrivalled.

Endless Love as a show is beautifully presented by a dazzling cast and a highly energised band, the result is a joyful, emotional rollercoaster... from the glitz, glamour and sentiment of soaring love songs, rocking out to 80’s classics and gettin’ down to outright floor fillers.... there really is something for everyone. It’s impossible not to sing along and it’s going to be one of the most memorable and enjoyable shows you’ll see.